ABSORB WHAT IS USEFUL…

One of the very worst pieces of advice ever given to the martial arts community at large came from the lips of Bruce Lee. 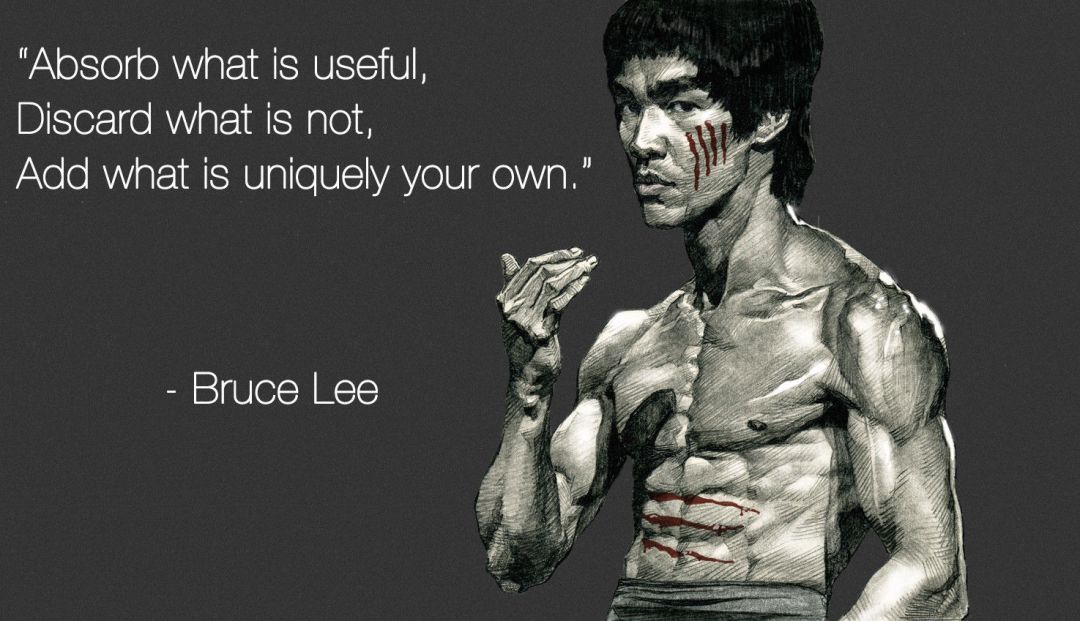 Determining just what is useful and what isn’t is quite a daunting task and one that should be examined closely. After all, a goodly number of today’s so-called “mixed martial arts” crowd as well as followers of numerous eclectic martial ways state very clearly that traditional martial arts aren’t entirely applicable to modern combat or combat at all. They believe that numerous techniques that are taught within the traditional martial arts either don’t work very well or, in some cases, not at all. This, they say, is why they have chosen to follow their “own paths.”

Executing a correct reverse punch, front snap kick, kotegaeshi, or o-soto-gari is a pretty daunting task for most raw beginners who have had little or no previous martial arts training. The new student can spend hours working on any one of these techniques for a whole month and it still is practically worthless in a real fight. The reason why is obvious; to develop any technique so that it is truly usable requires a great deal of practice over a period of time! There are no short cuts. My teacher said that developing effective technique is like making tea. It can’t be hurried and any attempt to do so will only ruin the drink.

It would be easy but very premature and terribly foolish for the novice to simply dismiss these fundamental techniques as being “useless.” The same holds true for other, more advanced techniques that he or she will eventually learn. I’m sure that you’ve encountered techniques that just didn’t work at first. I know I have. Still do. But with patience, some introspection, and lots of practice you’ve been able to see how they should be done, where your mistakes were, and suddenly they become functional!

When you learn a technique that doesn’t seem to work well for you, ask yourself, “why?” What are you doing wrong? Sometimes the error lies in the physical execution of the technique but sometimes it is hidden in a less obvious place. Maybe it’s your timing that’s off – and that can be indicative of a mental/psychological error or block of some kind, can’t it? Perhaps it’s your approach to the application of the technique or your approach (physical, mental, or even spiritual) towards your training “opponent.” Regardless, the error is thine. Find it and correct it. Sometimes it’s the finding of the error that corrects it.

To say that techniques of the traditional martial arts are not effective (in self-defense) is a blatant display of one’s own ignorance, and perhaps, one’s unwillingness to put in the required practice (which is a nice way of saying “lazy”). In days long since past, professional warriors (e.g., policemen, soldiers, bodyguards, and their teachers) relied on these arts for their very survival. Back then, it was pretty easy to determine if a given technique worked. If it didn’t, you died. Those who developed techniques that didn’t work took their failures with them to their graves. For the most part, we’ll never know what they were.

The techniques that did work are still with us to this day. If they didn’t work, they would have been buried long ago. So, to say that the surviving traditional techniques don’t really work is, in my opinion, a statement made by someone who has never learned genuine traditional technique…or who is unwilling, for one reason or another, to put in the time and training required to develop effective technique.

Beginning piano students dare not say that the classics are worthless and no longer functional! The masters who contributed to the creation of the traditional martial disciplines are our Bachs, Beethovens, and Mozarts.

To truly understand a technique and how it should be performed correctly requires at least 10,000 repetitions. In karate or kung-fu this isn’t terribly difficult, considering that you can easily practice 100 punches each day. In 100 days you should be able to perform the technique correctly, more or less. That doesn’t mean it can’t be improved, though.

But that’s not the same as making it workable. To be able to perform a technique effectively in combat requires much more practice. You see, the effectiveness of a given technique, whether it’s a punch, a kick, a joint twist or throw from aikido or judo…involves much more than just being able to perform the physical aspects of the technique correctly. Much. More.

Back when I trained in forms of Japanese karate, I could not, for the life of me, get a roundhouse kick to work. Actually, it took MONTHS before I figured out how to do it correctly. I guess I just had a mental block and I couldn’t imagine how to do it…but once I was able to throw a roundhouse kick, I couldn’t figure out how such a kick would ever be useful in fighting! I suppose Mr. Lee would have told me to reject it because, as far as I was concerned, it was pretty useless…

Then came Baguazhang. At first glance, this art seems to have about as much in common with combat as a fish does to a bicycle. It would have been all too easy to simply toss it away as being some sort of pointless, flowery, Chinese bilge water. But I didn’t. I stuck with it and studied it…in depth. I examined it carefully, examined myself, examined its strange footwork and body movements…and I practiced and then when I was sick of it, I practiced some more. And when I had problems making it work (which was pretty much all the time, at first), I stayed with it and figured out WHY I was having problems.

In any given martial discipline, at least a decade (or more) is required if one wants to truly understand the art. The problem is that most Westerners don’t want to spend that much time in training. They want “instant martial arts.” We’re accustomed to having “instant food” (which isn’t really food), “instant entertainment”, and now we want “instant martial arts.” But there isn’t such an animal…never was, and never will be.

So, rather than absorbing what you find immediately useful and rejecting what you think is useless, just ABSORB.

One thought on “ABSORB WHAT IS USEFUL…”