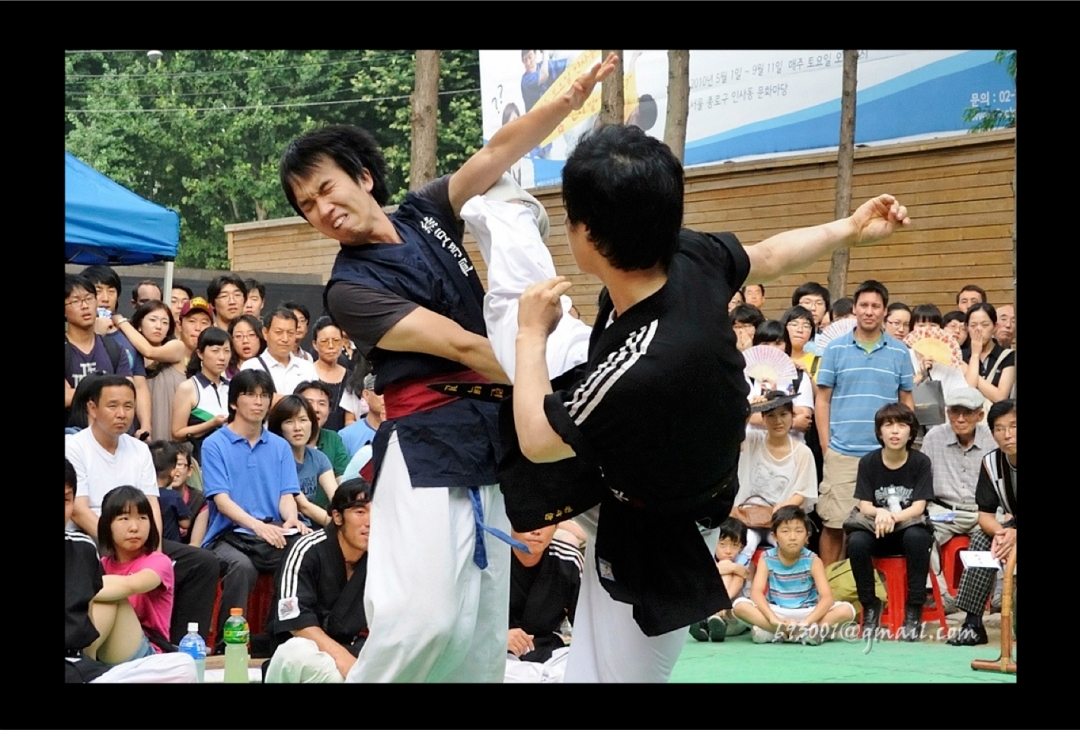 Almost everybody has heard of Taekwondo and Hapkido these days, but Taekkyon, the original indigenous martial art of Korea, is almost unheard of.  Almost wiped out during the Japanese colonisation of Korea, the art is now making a revival, and is listed both as a national treasure of Korea, and is the first martial art on the UNESCO intangible cultural heritage list.

The history of Taekkyon goes back to the mid Joseon Dynasty, around the 1700s, where it was practiced as a competitive sport with a winner-stays-on type rule set. It is believed Taekkyon evolved out of an even older, but now lost art called Subak. Little is known about Subak, but it is believed that it may have been the martial art of the Hwarang warriors of the Silla Dynasty (57BC-935AD). During this time martial arts were reserved for the ruling class, but after the fall of the Silla became popular among common folk. During the Joseon Dynasty it fell out of popularity among the Yangban elite, who thought that educated people should stay away from martial arts and focus on scholarly pursuits. It was probably around this time that the competitive “game” version evolved as a game for the farmers and peasant classes.

During the Japanese occupation, the art almost died out, but one man kept the art alive; Song Duk Ki. He

is credited with reviving the art in modern times. Song Duk Ki was born in 1893 in Seoul. He began training at a young age, under Master Lim Ho, of the Widae style. During that time many young people practiced Taekkyon, and there were two main styles: Widae, which was practiced by people in the city centre, and Ahratdae, which was practiced by people on the outskirts of the city. Big competitions were held between the two styles and rivalry was fierce. Then, after the 1910 Japanese invasion of Korea, Song Duk Ki changed his focus to Gung-do (Korean archery), one of the few arts not shunned by the colonisers. He continued his Taekkyon practice in secret, and after the surrender of Japan, he began to promote the art, gaining the rank of a “national living treasure” by the South Korean government.

Taekkyon has both a competitive, game-like version, and a combat version. The game, which is called Kyulyun, was played where two teams gathered, with a winner stays on format, until one team was completely wiped out. This

game had a dance like feel, as players stepped around each other while drums were played. Players had to either throw the opponent, or kick them in the head. Like modern day sports martial arts, a player could tap out to surrender. The ring was often made by laying down straw mats, but could also be on dirt or grass. The largest competition would typically be held on the 15th day of the 5th lunar month, which was called Tano, which also held Ssireum, Korean wrestling, tournaments. There was no prize, but the winner would be treated as a hero by both sides. It is said the focus on kicking techniques in Korea is due to the mountainous terrain; people had naturally strong legs from spending so much time climbing hills.

As far as combat, similar techniques are applied as in the game. The main difference however is the target areas and the power used. Pressure point techniques, eye gauges and locks are also common. The rhythmic steps and constant

motions of the hands distract the opponent, setting up for a kick or sweep. Unlike taekwondo, flying or spinning kicks aren’t often used, rather, low kicks to the shins or knees, sweeps and trips, and direct push kicks to the body are more common.

A typical Taekkyon class is very different to conventional martial arts: there is no warm up or stretching as such, rather, the class begins by practicing stepping patterns in a dance-like rhythm to traditional Korean music.  The stepping is done in a triangular pattern, based on the Chinese character 品. Strikes and kicks are added in, as well as patting of the body and clapping to stimulate blood flow. This is all done in time with the music. Sparring is taught within the context of the stepping patterns. Opponents square off and step in time with each other, constantly changing feet and seeking an opportunity to sweep or trip their partner.

I have just began my training in Taekkyon, here in Seoul, South Korea. I will be regularly updating my website about my training here, as well as continuing my writing about Chinese martial arts. http://www.monkeystealspeach.co.uk

My Name is Will and in 2007 I moved to China to follow my dream of learning kung fu in it's homeland, having spent 4 years learning Wing Chun previously. My journey started out in Qingdao, where I learnt some basic Shaolin kung fu and kung fu fighting techniques from various teachers. I was also accepted as a disciple of Master Her Ren Shan, one of the top masters for Tai Chi Push Hands in the city. During this time I also made some trips to Hong Kong to continue my Wing Chun training under Master Kwok Wan Ping. In 2009 I spent a year training at Kunyu Shan Martial Arts Academy, where I learnt Praying Mantis, Chen style Tai Chi and Qigong. After that I was blessed to have the chance to meet Master Zhou Zhen Dong, the lineage holder for Taiji Mantis in Yantai and after 3 years of hard training and dedication I was accepted as his inner door disciple. I was also made a member of the Yantai Taiji Praying Mantis Committee. Since then I have been continuing my training and development, while researching the history and personalities of Praying Mantis, as well as taking the opportunity to meet and train with people from other styles to broaden my perspective. I am also passionate about Chinese tea (www.oldmountain.yolasite.com), and in my spare time enjoy travelling. You can check out my youtube too www.youtube.com/user/tansaung View all posts by cyaolong

5 thoughts on “Taekkyon: the Original Martial Art of Korea”