The Origins and Lineage of Shaolin Wugulun Kung fu

The origins of Shaolin ChanWuYi and Wugulun Kung Fu date back to the sixth century. When Bodhidharma, who is credited with bringing Buddhism from India to China, settled in Shaolin there was already a Buddhist temple there.

While sitting for nine years in a cave behind the temple, Bodhidharma developed Zen Buddhism which he introduced to China and which later spread to Japan and the rest of the world. Needing some form of exercise to maintain the health of his own and his disciples’ bodies, he developed a series of movements or exercises designed to promote health and fitness – based often on the movements of birds and animals they observed around them — and at the same time to deepen the practice of meditation. Herbs from the mountainside were collected and used for healing.

Due to China’s turbulent history, the Shaolin Temple, with its highly skilled fighting monks, was sometimes in favour with ruling dynasties, sometimes not. It was destroyed and rebuilt a number of times. Around 1870 it was again in disfavour with the rulers of the Qing dynasty and the temple was in imminent danger of being destroyed yet again. The Temple Master instructed one of his foremost monks, Wu Gulun, to leave the temple and carry the traditions of the Shaolin culture with him to preserve them. He had, however, first to fulfill a rule of the Temple: that anyone leaving the temple should fight and vanquish all the monks to prove his strength and suitability to cope with the secular world he was entering. As the top Kung fu student, Wu Gulun easily achieved this feat and disappeared into the mountains to live in an isolated village, Bai Yu Gou, where he continued to practice and preserve the secrets of the Shaolin heritage. 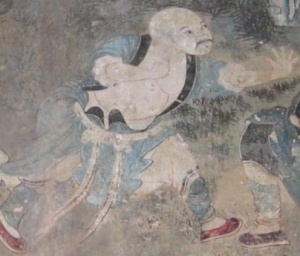 As he needed to be able to pass on this knowledge he married and had a son, Wu Shanlin, to whom he taught all the ancient secrets. Master Wu Shanlin became the second Grandmaster of the Wugulun lineage. Continuing to live in the small village, Wu Shanlin married and had two sons, Wu You De and Wu Tian You. To them and also his nephew, Qiao Hei Bao, and a young orphaned student, Zhang Qing He, he passed on the traditions.

Wu Tian You had a son who sadly died when he was quite young. This son was Master Wu Nanfang’s father. From an early age Wu Nanfang studied with his great grandfather, Wu Shanlin, then with Qiao Hei Bao and Wu You De and later Zhang Qing He. He is thus the direct descendent and inheritor of the Shaolin ChanWuYi and Wugulun tradition.

The 1920’s in China was a period of huge unrest and turmoil. In 1928 a general, Shi You Shan, was looking at the Shaolin temple as a possible source of resistance and danger so he sent one of his underlings there to try to gauge just what kind of a threat the fighting monks posed. The underling asked who the best fighter was as he wanted to fight him and see how strong he was. He was told that actually the best fighter, Wu Shanlin, was not in the Temple but in an isolated village in the mountains. The underling found Wu Shanlin and challenged him to fight with his sword. So powerful was Wu Shanlin’s qi that he paralyzed the man’s sword arm with just a look and a shout, causing the sword to fall uselessly to the ground.

Within two days of Shi You Shan hearing about this incident, he decided the Temple was indeed a threat and destroyed it almost totally.

As Master Wu Gulun’s greatest desire was that the Shaolin tradition should be returned to the Shaolin Temple when the time was right, Wu Shanlin returned to the devastated Temple with his son, Wu Tian You, with the intention of helping to rebuild it and restore the traditions and heritage which he had been preserving. He found to his dismay, however, that the monks were demoralized by the defeat, and most decided to either return to a secular life or join the army. The remaining few were men of poor character and Wu Shanlin felt he could not pass on his knowledge to them as it might be used wrongly, maybe to hurt people rather than to rebuild the Temple. He stayed for three years, teaching a few basic Wugulun kung fu moves, but then returned to his village to wait for a more auspicious time. Many current kung fu teachers claim that they know the original kung fu forms from their teachers who had practiced under Wu Shanlin. In reality they know only a few very basic forms.

Zhang Qing He, the third Grandmaster, was an orphan who was rescued and looked after by the monk, Chun Quan, in a small temple on the Luoyang side of Song Mountain. Chun Quan sent him to study with Master Wu Shanlin when he was about twenty years old. Zhang Qing He also qualified as a doctor and was in fact better known for his medical skills than for his kung fu.

In about 1988 Master Zhang Qinghe came to live at the Shaolin Temple to treat his beloved Buddhist Master who was very ill. There he came into contact with a young monk, Dejian, who was studying and teaching at the Temple. Dejian started training in the Wugulun Kung fu style with him. In 1990,Master Zhang Qing He requested Wu Nanfang, who was teaching Wugulun Kung fu nearby to come and introduce Dejian to Wu Nanfang. They are brothers, because they are fellow apprentices of one and the same master. 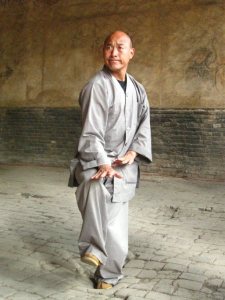 “If you would like to study at the Shaolin Wugulun Kung Fu Academy or would like to find out more information about the kind of training you can expect at the school click the link above. It is my opinion that this school is one of the very few authentic Shaolin Schools left in China and is definitely worth considering if you wish to study authentic Shaolin martial arts. Lately, I’ve been somewhat disillusioned with some of the training and also the managerial practices I’ve witnessed at some of the other more popular Shaolin International Kung Fu Schools in China. Maybe its time for a change a return to the roots of Shaolin with more focus on self discipline and quiet meditation rather than the flash and high flying kicks of the modern perversion we see so often. A perversion that turns poor young ambitions Shaolin masters into business men who scramble over westerners for money with little thought to the detriment they are doing to the name of Shaolin and China as a destination for martial arts.” – David Kelly