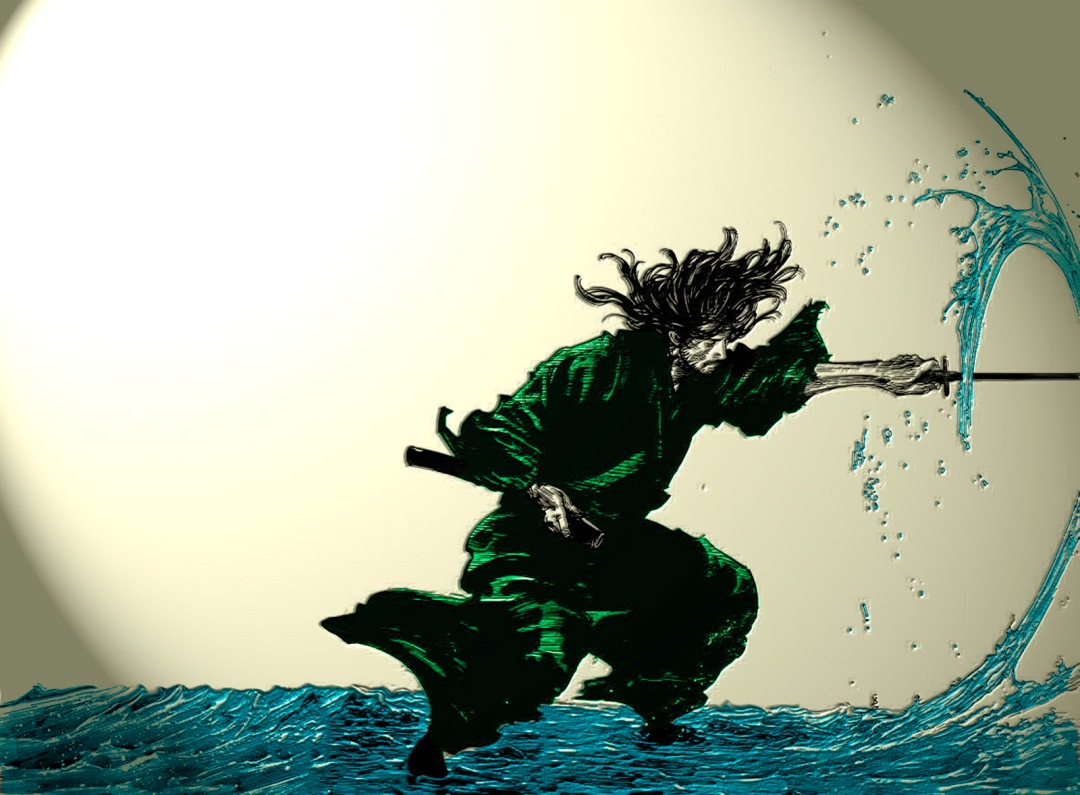 Miyamoto Musashi (宮本 武蔵?) (c. 1584–June 13 (Japanese calendar: May 19), 1645), also known as Shinmen Takezō, Miyamoto Bennosuke, or by his Buddhist name Niten Dōraku, was a Japanese swordsman and samurai famed for his duels and distinctive style. Musashi, as he was often simply known, became renowned through stories of his excellent swordsmanship in numerous duels, even from a very young age. He was the founder of the Hyōhō Niten Ichi-ryū or Niten-ryū style of swordsmanship and the author of The Book of Five Rings (五輪書, Go Rin No Sho?), a book on strategy, tactics, and philosophy that is still studied today.

“I have trained in the way of strategy since my youth, and at the age of thirteen I fought a duel for the first time. My opponent was called Arima Kihei, a sword adept of the Shinto ryū, and I defeated him. At the age of sixteen I defeated a powerful adept by the name of Akiyama, who came from Tajima Province. At the age of twenty-one I went up to Kyōtō and fought duels with several adepts of the sword from famous schools, but I never lost”.
—Miyamoto Musashi, Go Rin No Sho 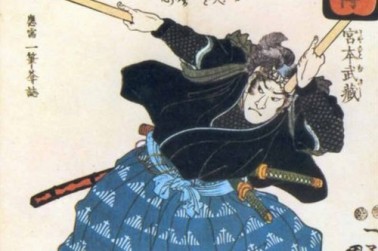 According to the introduction of The Book of Five Rings, Musashi states that his first successful duel was at the age of thirteen, against a samurai named Arima Kihei who fought using the Kashima Shintō-ryū style, founded by Tsukahara Bokuden (b. 1489, d. 1571). The main source of the duel is the Hyoho senshi denki (“Anecdotes about the Deceased Master”). Summarized, its account goes as follows:

In 1596, Musashi was 13, and Arima Kihei, who was traveling to hone his art, posted a public challenge in Hirafuku-mura. Musashi wrote his name on the challenge. A messenger came to Dorin’s temple, where Musashi was staying, to inform Musashi that his duel had been accepted by Kihei. Dorin, Musashi’s uncle, was shocked by this, and tried to beg off the duel in Musashi’s name, based on his nephew’s age. Kihei was adamant that the only way his honor could be cleared was if Musashi apologized to him when the duel was scheduled. So when the time set for the duel arrived, Dorin began apologizing for Musashi, who merely charged at Kihei with a six-foot quarterstaff, shouting a challenge to Kihei. Kihei attacked with a wakizashi, but Musashi threw Kihei on the floor, and while Kihei tried to get up, Musashi struck Arima between the eyes and then beat him to death. Arima was said to have been arrogant, overly eager to fight, and not a terribly talented swordsman.
—William Scott Wilson 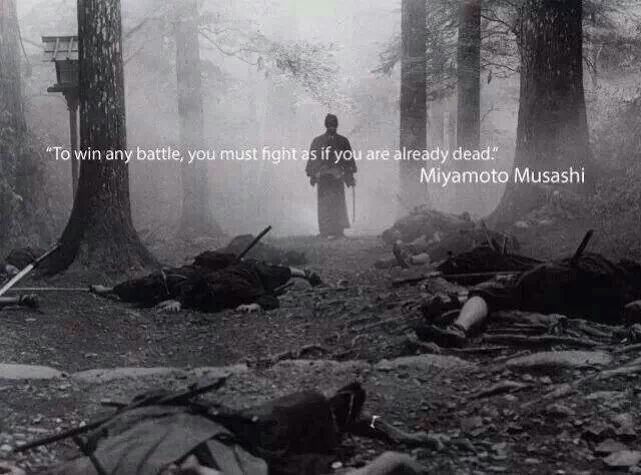 His Most Famous Duel

On April 13, 1612, Musashi (about age 30) fought his most famous duel, with Sasaki Kojirō, who was known as “The Demon of the Western Provinces” and who wielded a nodachi. Musashi came late and unkempt to the appointed place — the island of Funajima, in the Kanmon Straits separating Honshū and Kyūshū. The duel was short. Musashi killed his opponent with a bokken that Legend says he had carved from an oar used on the boat that carried him to the island. Musashi’s late arrival is controversial. Sasaki’s outraged supporters thought it was dishonorable and disrespectful, while Musashi’s supporters thought it was a fair way to unnerve his opponent. Another theory is that Musashi timed the hour of his arrival to match the turning of the tide. The tide carried him to the island. After his victory, Musashi immediately jumped back in his boat and his flight from Sasaki’s vengeful allies was helped by the turning of the tide. Another theory states he waited for the sun to get in the right position. After he dodged a blow, Sasaki was blinded by the sun.

Musashi created and perfected a two-sword kenjutsu technique called niten’ichi (二天一, “two heavens as one”) or nitōichi (二刀一, “two swords as one”) or “Ni-Ten Ichi Ryu” (A Kongen Buddhist Sutra refers to the two heavens as the two guardians of Buddha). In this technique, the swordsman uses both a large sword, and a “companion sword” at the same time, such as a katana with a wakizashi.

The two-handed movements of temple drummers may have inspired him, although it could be that the technique was forged by a means of natural selection through Musashi’s combat experience. Jutte techniques were taught to him by his father — the jutte was often used in battle paired with a sword; the jutte would parry and neutralize the weapon of the enemy while the sword struck or the practitioner grappled with the enemy. In his time a long sword in the left hand was referred to as gyaku nito. Today Musashi’s style of swordsmanship is known as Hyōhō Niten Ichi-ryū.

Musashi was also an expert in throwing weapons. He frequently threw his short sword, and Kenji Tokitsu believes that shuriken methods for the wakizashi were the Niten Ichi Ryu’s secret techniques (see Hayakutake-Watkin).

Musashi spent many years studying Buddhism and swordsmanship. He was an accomplished artist, sculptor, and calligrapher. Records also show that he had architectural skills. Also, he seems to have had a rather straightforward approach to combat, with no additional frills or aesthetic considerations. This was probably due to his real-life combat experience; although in his later life, Musashi followed the more artistic side of bushidō. He made various Zen brush paintings, calligraphy, and sculpted wood and metal. Even in The Book of Five Rings he emphasizes that samurai should understand other professions as well. It should be understood that Musashi’s writings were very ambiguous, and translating them into English makes them even more so; that is why so many different translations of the Go Rin No Sho can be found. To gain further insight into Musashi’s principles and personality, one could read his other works, such as Dokkodo and Hyoho Shiji ni Kajo. 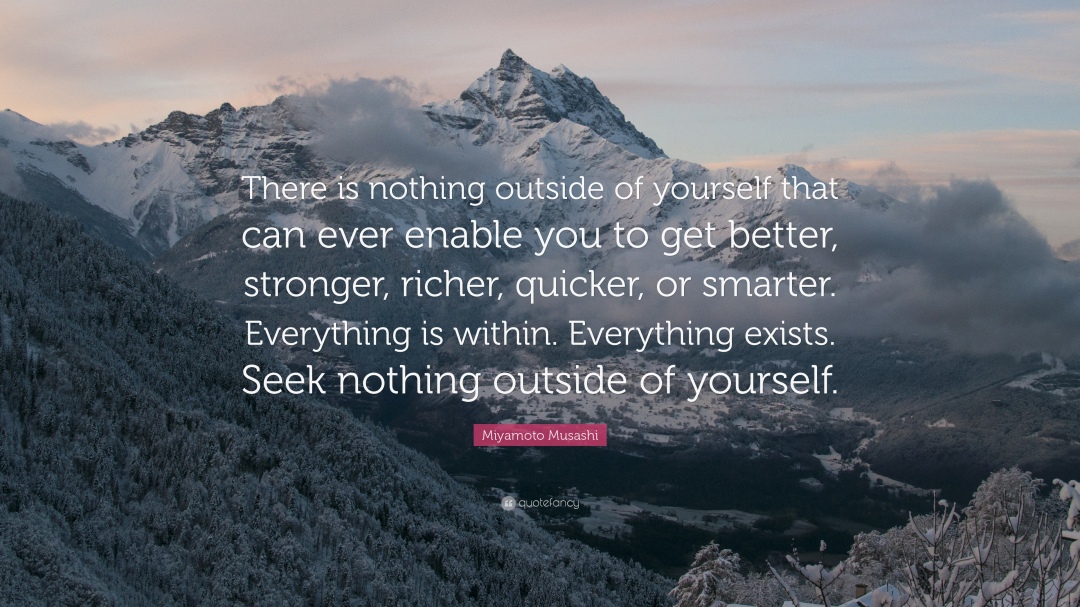