Yesterday, Wednesday, was a rest day, as is Saturday. We bundled up in Sifu’s truck and drove north to Mae Hong Son close to Burma. We visited some hill tribe markets and two principal Temples, one in front of a small lake and another on a hill overlooking the town. The hill tribes women’s hand weaving is exceptional and they sell the most delicious wild honey by the side of road. One of the highlights of the day was when we picked up four Buddhist monks walking up the winding mountain road who piled in the truck with us. Not only is Sifu Iain extremely knowledgeable in Kung Fu and martial arts in general, he has also a deep knowledge and experience of the local area and its peoples. Thus, our journey was one through the historical, cultural and philosophical landscapes of the region. Being so close to Burma there is a very strong influence from the Shan people. Indeed, the whole area has been flooded with various ethnic groups, in particular hill tribes fleeing conflict in Burma. I finally had the current political situation in Thailand explained effectively over lunch by Sifu Iain and the day ended at the Temple on the Hill in Mae Hong Son, Wat Phra That Mae Yen. It is hard to describe how extraordinary are these temples. The view from the mountain top on which the temple sits was spectacular as the jungle stretched out below with its forested hills and mountains, limestone spires and the blazing sun setting behind. 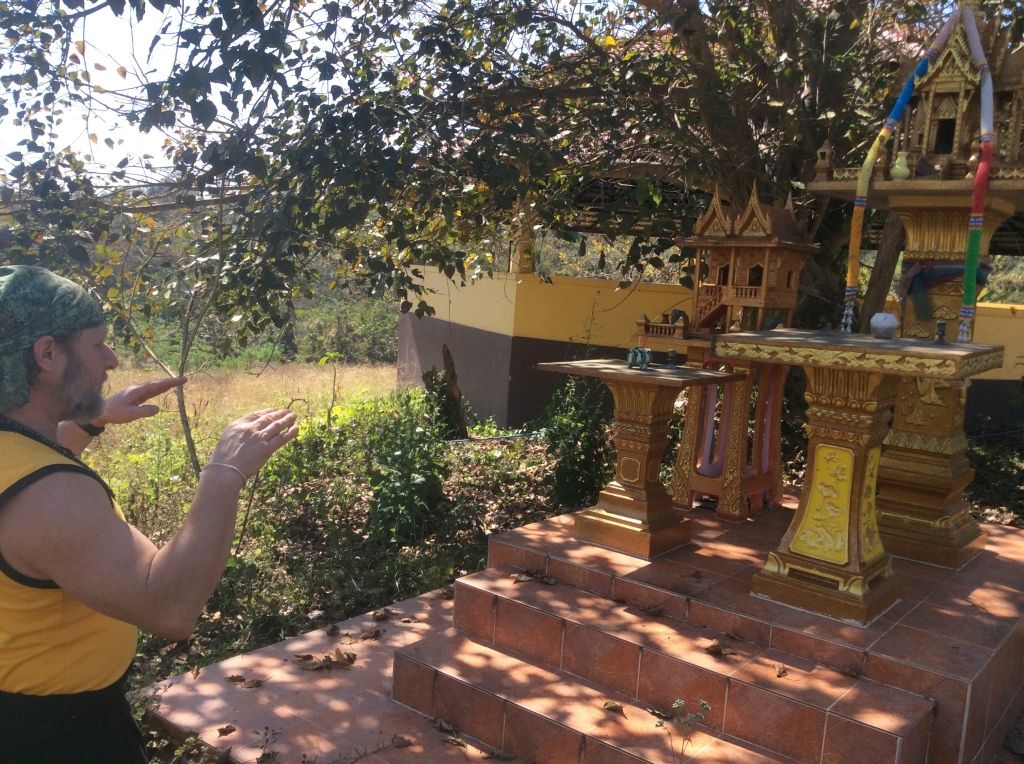 Today we followed the same training schedule from 6 am to a little after 9 a.m., and 3:30 p.m. to about 6:15 p.m. Along with my extra 2 hours in the middle I also received a real Thai Massage. It was as much ordeal as it was massage but the lady hired for the massage was very good natured. She is a strong and gifted traditional massage therapist. She laughed at the noises I made with her elbows in my back and foot in my leg and told me to say, “Sooo, sooo!”. She tweaked my nose and invited me to the discotheque tonight in Pai but I told her I couldn’t go. I learned later from Sifu that men with big noses are considered extremely handsome in this part of Thailand; I’ve finally found somewhere that values my natural good looks and charm! We did a lot of Chi Kung, stretching and meditation today. We also continued with the Tigre-Crane Sum Chien and another sequence I have not yet described called Shuan Yang, which in English is called Sun Frost White Crane. Shuan Yang is a kind soft or gentle martial art that looks a lot like Tai Chi, but more martial. Indeed, some believe it to be the origins of Tai Chi. We did some great punching drills with the suspended sand filled cloth sacks and had a marvellously vigorous kicking session. Today on weapons I got to take up the actual bladed sabre, the Tan Dao or Chinese Broadsword. Wow, that was a gas training with sword in the open outdoor training ground my traditional black and gold Kung Fu pants billowing wet chest bared to northern Thailand’s blazing afternoon sun.

At tea Sifu spoke of the history of Nam Yang’s Tigre-Crane lineage. His Master’s Master, Master Ang, was the one I mentioned earlier who brought the art out of China and passed it eventually to Master Tan Soh Tin who then passed it to Iain Armstrong, the man I call Sifu. What an amazing history. Master Ang started Kung Fu as a boy and had three different masters. His first master was known as “the secretive old man” who introduced him to Tigre-Crane at 8 years old. His second master was an herbal medicine peddler who specialized in the Shaolin weapons system and Tiger form. The third was a Shaolin monk. I was amazed to learn that Master Ang eventually fought in Sun Yat-Sen’s army with the Koumintang, which was subsequently taken up by Chian Kai-Shek. As the Communists became victorious and began executing the Shaolin Kung Fu martial artists Master Ang emigrated to Singapore and later started Nam Yang in 1957. He ran the club until his death in the mid 1980s and the leadership passed to Master Tan who trained Sifu Iain. Iain now has schools here in Thailand, in the UK, in Russia and another about to open in Italy. It is very special to be a part of this lineage and I hope to bring home some foundational skills I can practice on my own. I’ve taken to playing flute under the stars while the others arrive to the outdoor training area for the morning session. Thus, I must sign off as 5 a.m. comes early!

Today was an awesome day! I was up about 5:30 a.m. and we started a little before sunrise with Chi Kung and Sam Chien, crescent moon shining with mist hanging off the jungle. We trained with the group this morning from 6-9 am and in the afternoon session from 3:30 until a little after 6 p.m. I did 2 hours of solo instruction focussing on Chi Kung and Sum Chien. Sum Chien is a series of moves that forms a basis for the Southern Shaolin Tigre-Crane form we are learning. I also got to begin weapons training with staff and starting on Chinese Sabre using a stick. I thought staff would come more easily to me than sword but I probably did better with the sword technique. I worked on weapons with the head student who is also an instructor. The hardest part is probably the footwork. All in all I would say we spent about 2.5 hours today in stretching and conditioning, lots of stretching.

In the evening we focused on special breathing techniques that apply to Chi Kung and Sum Chien, which Sifu said were actually quite advanced. I did well with my prior yoga and Chi Kung training. Then we worked on punching drills into heavy cloth sacks filled with sand hung from the rafters. It makes your knuckles pretty red but is very instructive on technique and really fun!! The idea is not to swing the sack but to be able to dent it by sending your chi into the target. One of my favourite times of day is the break in training when Sifu call us up to the veranda where we sit on teak stools and he pours special tea in all our cups on a table shaped like a dragon. He then delivers teachings about technique principles, tells stories and dispenses wisdom. Like I said, you can tell a lot about Sifu by how his chief students treat him: with utmost respect and admiration, hanging off every word with the rest of us. Sifu spoke about Kung Fu as a way of life; the martial aspect is part of a bigger picture and no one part is more or less than the other. Kung Fu prepares us for meditation and the pathway to enlightenment.

At afternoon tea Sifu spoke about the tendons. I had mentioned that I felt where an injury in my shoulder was really being stretched when being corrected in some technique for practicing one of the slow punch forms early in the morning. At first it hurt but I stayed with it and then it started to open. Sifu said that such body awareness is the first step to Kung Fu. He said one’s tendons have a grain like wood. When you get injured it forms a pattern in the tendon, like a knot. As you develop your awareness you can use the Kung Fu forms to go into the tendon and open it up taking out some of the scar tissue and re-patterning the tendon. He said something else that was very profound which reminded me of Sequoyah. Speaking about training and repetition, for example of a simple movement like a step or the most basic punch over and over again, Sifu said that you could never get board of anything that is done with deep intention and full awareness.

Life here has a rather monastic feeling. We train before sunrise and retire a little after sunset. Two meals a day are wholesome yet simple, rice with vegetables and a clear, tangy vegetable soup, prepared by our cook who is mostly blind and comes from one the tribes originally on the Burmese side. Accommodations are comfortable yet spartan, the bed being a heavy, handcut bamboo cot. It is surprisingly quite chilly in the morning and I really missed my fleece pants for the first couple hours but had to put on a good showing as a Canadian while everyone else was quite bundled up.

There are several people training, all male from young to old: two other Canadians, a Dutch fellow, a Belgian and a Brit. The Belgian and Brit are senior students. One is already a teacher and the other well on his way, very dedicated, lovely young men. Tomorrow we have a rest day and are going to see some remote hill tribes with whom Sifu is connected. I’m pretty sore in many places with a nice, large bruise on my arm from yesterday’s push-hands activity, and very happy.

I have arrived in Pai, Mae Hong Son Province for two weeks of traditional Shaolin Kung Fu training in northern Thailand. After a flight delayed by fog we flew a short but spectacular journey over forested mountains and I’m now at Nam Yang Mountain Retreat, International Martial Arts Kung Fu and Meditation Training Centre. Although my work contract allows for 6 weeks of holiday, this is the first real vacation I’ve had since our honeymoon 8 years ago. I really need it.

It is very special here. Nam Yang was created by Sifu Iain Armstrong and his wonderful Thai wife under the guidance of Grandmaster Tan Soh Tin with whom he has studied 30 years. Grandmaster Tan’s master brought southern Shaolin (Tigre-Crane) Kung Fu out of China after Mao’s ascendancy when the Shaolin martial artists were being executed. Nam Yang is near the town of Pai in northern Thailand about 30 km from the Burmese border. They grow most of their own food, including the rice, pineapples and bananas. The architecture is beautiful in the local traditional style giving the whole place a Shaolin Temple like quality. It is an extraordinary achievement! They have a large kitchen and open eating area, an office, Buddha House for meditation with two great Nagas (Dragons) descending the stairs, two training octagons, one which is covered and one open-area, plus the living quarters. Accommodations are simple, almost spartan, but we have what we need to get by and it is lovely!

I had a great sit with Sifu Iain over a special tea to review my training goals surrounded by the beautiful landscape and sprawling grounds of Nam Yang Retreat Centre. Afterwards I joined in the evening’s training. We did about 1.5 hours stretching and prep before doing push-hands and some basic drills. Sifu Iain is so authentic. You can tell a lot about Sifu by how his chief students treat him; that says it all. There are several people training, all male from young to old. Two other Canadians, a Dutch fellow, a Belgian and a Brit. The Belgian and Brit are senior students. One is already a teacher and the other well on his way, lovely dedicated young men. We went to Pai for supper tonight as one is leaving tomorrow after having been here some months. The other pretty much lives here training every day all day and sometimes teaching. Tomorrow we start at 6:00 am with Chi Kung for the sunrise. Wednesday is a rest day and we will go to town of Mae Hong Son on the Burmese border visiting remote hill tribes with whom Sifu is connected.